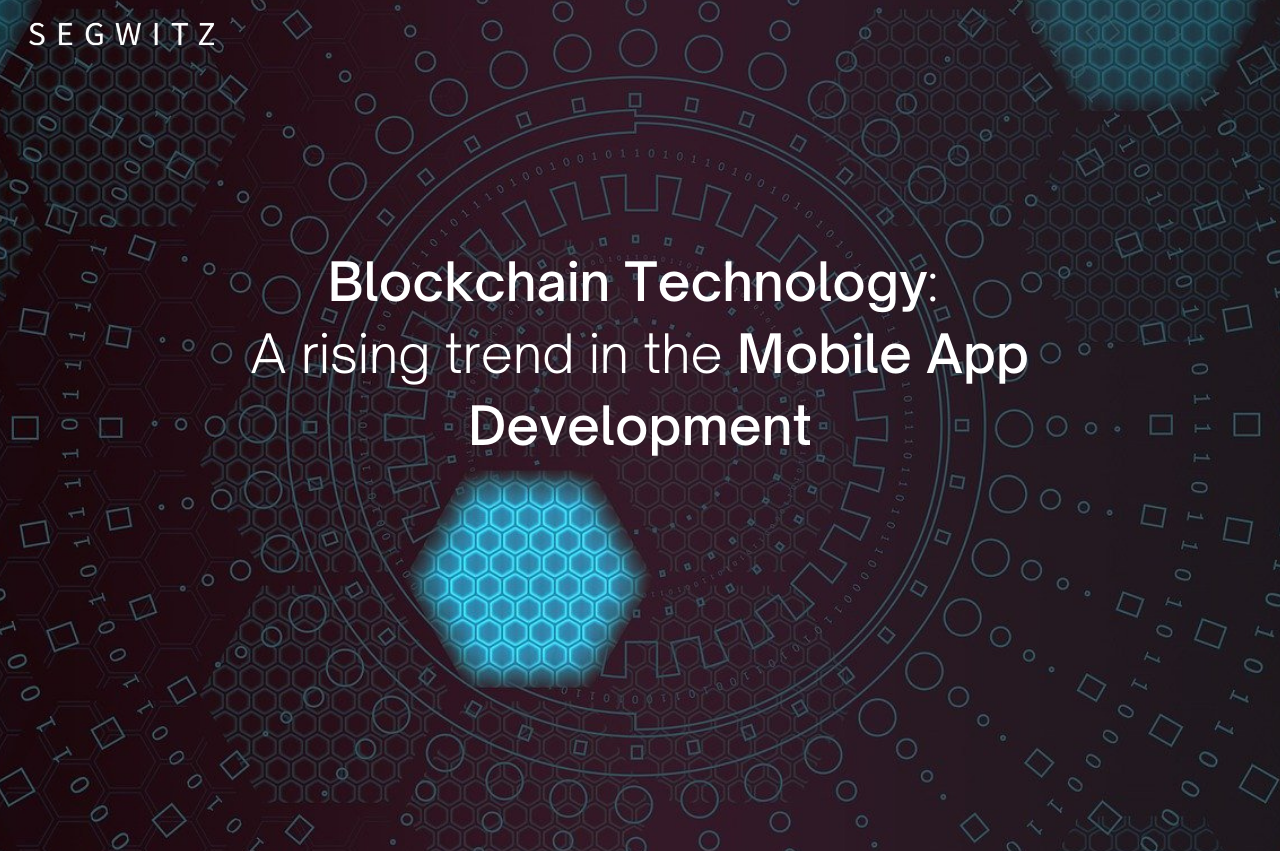 Blockchain innovation is spreading its roots into industries like real estate, education, legal, and healthcare due to its appealing decentralized infrastructure which harbors advantages that were previously un-thought of.

Its impact is even more deep-seated in the mobile app development industry as it includes features like peer-to-peer and keyless payment security, distributed digital ledger architecture, along with fraud and data-leak prevention.

Utilizing Blockchain in app development will not only enhance app security but also benefit all the stakeholders through improved transparency. It nullifies the risk of any fraudulent practices as no third party can influence either of its transactions.

A multitude of actions involved in digital transactions can be integrated through the use of Blockchain based protocols which also aids in the maintenance of dedicated virtual records, depending on the specific needs of the mobile application.

Implementing Blockchain procedures in the mobile app industry can unsettle the currently reigning business model through automation of time-consuming processes by providing insanely low-cost solutions. Even though the concept of its application is still in its initial stages, it defies outdated traditions of online businesses as it makes digital transactions even more accessible rewarding the app industry with endless possibilities with its game-changing innovation.

How has Blockchain captured the attention of Mobile App Developers?

The challenge most start-ups would face is in understanding the process of applying Blockchain by determining the trade-off between the Bitcoin Blockchain architecture and the currently employed model. Its application would become valid only if start-ups can fuse it with a peer-to-peer cash system. This would also require the start-up to factor in the compatibility between the requirements of the start-up itself and the Bitcoin Blockchain infrastructure.

The primary goal is to make mobile transactions safer to use so that phone users can rely on mobile banking via secure apps. One such instance of a successful collaboration of Blockchain technology and a mobile payment app is the one between telecom companies and TelCoin. Then again this instance is exclusive to only mobile payments and not bank transactions.

The Blockchain revolution is already seeping into start-ups like Landmapp that are utilizing it to develop documentation services of land rights and reduce the cost of land titles in third-world nations like Africa. Other apps like ShelterZoom also build Blockchain based services that streamline Real estate offers and secure contracts. Major IT companies like IBM are exploring the network identification capabilities of Blockchain so that users can verify their identity on mobile apps more conveniently.

One of the primary issues faced by users is related to the problem of making in-app purchases. Even though a major portion of the world’s population is now under the influence of the Smartphone, they are yet to master the means of proceeding with in-app purchases. The usual method of making such purchases mostly include the use of credit or debit cards. The multiple steps involved in such transactions possess the increased liability of fraudulence, card-processing fees, gateway fees, app store fees, and bank transfer fees. In the end, this entitles the developer to use only 70% of the amount paid. Utilizing Bitcoin’s decentralized model through the use of an app coin reward system, developers can now receive an 85% share of payments made. Also, in-app purchases can become faster and easier to use as it eliminates the need for credit/debit payments entirely.

Blockchain is accelerating its pace to the top of a developer’s preference list due to one very significant reason – it doesn’t require third-party mediation in order to complete transactions. It facilitates much faster and more efficient transaction chains via streamlined Blockchain based automation for all transactions. Usually, it takes a bank a minimum period of 24 hours to conclude a single transaction whereas the Blockchain framework allows for completion of the transaction at a pace that’s 10 times faster. Not only that, bank servers are often found to be offline while Blockchain technology provides open transaction services which are available 24/7.

In addition to this, the chief app retail stores like Google app store and Apple app store retain arbitrary control over the approval process of any new app that is to be sold through these virtual outlets. The Blockchain model makes it so that apps can be approved faster by means of a transparent developer reputation system that employs the consultation of a decentralized public ledger. It enhances the ranking system that users use to popularize the apps of certain developers.

What the Blockchain Model offers to be is a wall of impenetrable security which involves adding layer after layer of protection over your data that requires a unique key to access. These decryption keys are assigned to each private user which is distributed over a decentralized system across a network of computers, making it impossible for anyone to influence or access said data.

The prevalence of hackers and malware corruption can be challenged head-on by making the best of Blockchain technology in mobile apps. Developers can now store DNS entries on fully-secured decentralized platforms that eradicate any possibilities of hacking the development infrastructure. It gives the developer full control over domain records through transparent and distributed DNS which can’t be modified without their supervision. This is made possible through the use of KSI or Keyless security Infrastructure that stores data in the form of a cryptographic hash. By running a hash algorithm verification process any type of manipulation can be tracked in real-time which eventually ensures maximum protection of your mobile app infrastructure.

Conveying transactions over a peer-to-peer network using Blockchain technology ensures that contactless mobile payments can be made faster, more secure, and reliable. Developers can affordably establish and maintain peer-to-peer payments by integrating its utility in their applications. This is done through thousands of privately owned devices called ‘nodes’ which further adds assurance to the whole process by eliminating any chance of undergoing downtime as it is not possible for all of the nodes to crash at the same time.

Eliminating middlemen in the Advertising Model

Blockchain is sure to change the entire landscape of the advertising model for developers. Currently, app developers are required to invest in an advertisement through a ‘cost per installment’ campaign ordeal in order to broadcast the app to the widest possible audience. This scheme, however, involves a number of middlemen who deduct a small portion of the proceeds from each sale made, which eventually reduces the amount that trickles back to the developer. Through the application of the Blockchain model, the cost per installment model is then swapped by a more efficient cost-per-strategy approach. This involves the use of an app coin reward system which gives back to users for the time they spend on the app. This method eliminates the need for any middlemen as the users will now use virtual coins to transact all in-app purchases, putting the money directly into the developer’s pocket.

Blockchain technology is empowering both the developer and the user to track information easily in real-time. This is made possible because developers can record Blockchain encrypted data in such a way that users can track such data without any breach. The entire Blockchain system is designed in such a way that a developer can conveniently trace an issue and fix it immediately. It allows for efficient authentication of assets which prevents any fake exchanges or misinterpretation of original data from taking place. For instance, if an app is being developed for a supply-chain management business then the app’s Blockchain framework can help the user track the complete journey of the product, from the point of manufacturing till completion of sales or delivery. Also, end-users of the app can access crucial details of the transaction like product specifications, serial number, quantity availability, and shipment notification, and so on via a secured medium.

The era of using the cumbersome process of entering a password to validate your online identity is slowly but irrefutably nearing an end. Unlike other technologies, Blockchain relieves the user of the same as its innovation allows app developers to authenticate user transactions without asking them for any specific password. The Blockchain verification process has been designed based on an incorruptible and highly secure identity authentication system that reads your digital signature by using public-key cryptography. This private key functions as a master password that unlocks all digital assets for the individual party in question.

The Blockchain revolution has arrived and is here to stay! In the coming years, we can be sure to see more app developers taking advantage of the undisputed benefits of Blockchain technology. It is a clear choice as no other form of digital tech offers such high transparency, security, and efficiency when compared to Blockchain. This innovation has been perfected to help streamline all transactions while maintaining full disclosure through a public ledger system via distributed platform.